I learned about this review game at a conference and tried it out with my students.  It's called Organized Chaos.  It would work well for any subject!  Here's what you do: 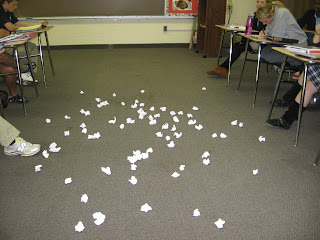 Here's a photo of high school seniors participating in this game.  I was surprised at how much they enjoyed it, and basically at how I was able to trick them into having fun when they were really just answering questions!  I was reminded that students dearly love to do things that are normally not allowed in a classroom, even if it is something as simple as throwing paper.  I was also reminded of how much they are still children, even though they are so close to adulthood.  We spent a very enjoyable 15 minutes reviewing in this way.  Why not try it yourself?
Posted by Renée at 5:35 PM 20 comments

ScreenChomp for iPad2 is fast becoming one of my favorite apps to use in French class.  This app is basically a white board that students can draw on, but they can also import photos, AND they can record their voices!

Here's an example of how I used it in 3rd year French.  Students had been reading and studying a short story (a chapter from Le Petit Nicolas called les cow-boys).  In the past, one of the activities I've done to help students review the story was to divide them into groups and ask them to act out a scene from the story for the class with costumes & props.  This year, I divided the class into groups as usual, and then I asked them to create a "freeze frame" of the action happening at that point in the story.  I assisted the groups by taking a photo of the "freeze frame" on one of the students' iPads.  I assigned one student in each group to be in charge of the ScreenChomp.  That student imported the photo to ScreenChomp.  Then the group had to describe what was happening in the photo in French.  Each student had to say one sentence.  The group was able to record their description in ScreenChomp, and then the group leader sent the ScreenChomp to me via email.  Later, I projected all of the ScreenChomps with my videoprojector, and everyone enjoyed watching a quick review of the story.  Here's an example of one of the scenes:

I'm asking myself if this was better than just acting the scenes out for the class as we'd done in the past.  I noticed that students seemed to enjoy it, and that they spent a little more time working on their pronunciation because they were being recorded.  I also noticed that in the end, I'd saved some significant class time by doing it this way, and that's always an advantage for me.  What do you think?