French Accents on the iPad 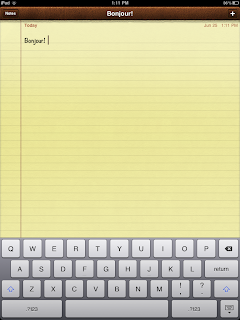 When you come to a letter that needs an accent added to it, just hold your finger on that letter, and then possible accents will appear. 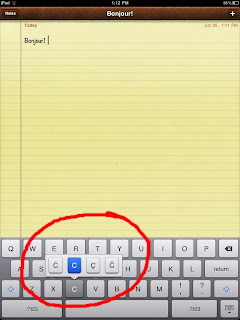 ﻿Slide your finger from the original letter to the letter containing the accent you wish to use, and then tap the key.  And voila! 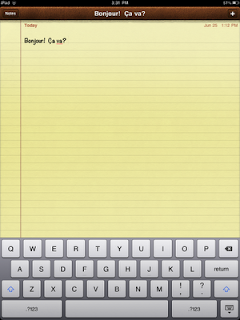 ﻿Stay tuned for more on how to use an iPad in your classroom :).
Posted by Renée at 6:37 AM 1 comments

All students & teachers in my high school will have the new iPad2 next fall!  The teachers were given their iPads last week, and then we had 3 days of training on how to use them.  My amazing colleagues John and Karen shared their vast knowledge with the rest of us and inspired us to figure out how to use them effectively in our classrooms.  ﻿

My favorite app so far is called FaceJack.  I can't wait to make some new movies about Jacques the mannequin to use in my classroom.  Here's what you can do with FaceJack:

It's simple, easy and in my opinion, INCREDIBLE!  In addition to making videos about Jacques, I've thought of a few more ways to use this:
Stay tuned for more posts on how to use the iPad2 in your classroom!
Posted by Renée at 8:09 AM 1 comments

How to use a mannequin in your classroom #11: Creative writing

My first year students were learning to name methods of transportation, which inspired me to write a story about Jacques, the classroom mannequin.  In the story, Jacques is trying desperately to get to his girlfriend's house to pick her up for a date.  He tries various methods of transportation, but each one fails for one reason or another.  In the end, he has fallen off a bike and broken his leg, so he walks the rest of the way, dragging his broken leg behind him. When he arrives (late, obviously), his girlfriend's dad opens the door and says, "I'm sorry, but Suzette isn't here..."

Students were asked to write a 5 line ending to the story.  They worked in groups of 2, and were instructed to write out their lines on paper.  Then they had to act out their endings for the class.  Here are some photos of their endings.

I had the undivided attention of my students the day that I taught this lesson.  Really.  You could have heard a pin drop.  How did I accomplish this?  I acted out the story (with costumes, sound effects and various props) as I told it.  My students love it when I do this sort of thing.  As you can see, they were inspired to write some really creative endings.  We all enjoyed watching what each group came up with, and all of my students were engaged in trying to communicate their original ideas in French!