How to use a mannequin in your classroom #16: Break-out lesson!

Bonjour fellow teachers!  I'm excited to share a new idea with you that I tried for the first time last month.  I was inspired by a presentation I attended at a world language conference on creating a "break-out" lesson.  Have you heard of these?  I decided to try one as part of my semester exam review in my French III class.

It was a lot of work to create this lesson, and at one point I did wonder if it was going to be worth it.  My students adored it though, and I thought it was fun, creative and a great way to review major concepts from the semester.

If you aren't familiar with the concept of a break-out lesson, the basic idea is that groups of students are racing each other to unlock boxes containing clues which lead them to unlock the next box.  Each group is racing to be the first to make it to the final box.  So, one needs to create some sort of story which gives the students a reason for wanting to race to that final box.  That was the fun part for me!  I created a story about one of my classroom mannequins, Suzette.  My students are used to hearing stories about the adventures of my mannequins who go by the names of Jacques and Suzette, and they love any lesson that includes stories about their lives.  I told students that Suzette was actually a secret agent working undercover for the Police Nationale, and that she had been poisoned.  Their mission:  find the antidote before it was too late!

When they entered the classroom, they saw Suzette on the floor: 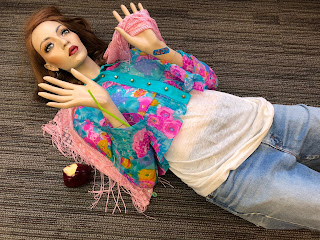 Notice the apple on the floor next to her...students were supposed to figure out that she had taken a bite and fallen to the ground because she had been poisoned.  Suzette was visible from the door of my classroom, and other teachers and students stopped in to ask what was going on!

I projected an image on the screen in my classroom that looked like a memo from the French police showing Suzette's photo, and her real name (Angèle LaFleur) and identity as a secret agent.  I dressed up as a representative from the French police (trench coat, badge, etc.) and explained the mission to the class.

Students were divided into teams (groups of 3) and given their first task.  When they completed it and everything was correct, I gave them directions in French to the location of the next box and the combination to unlock it.

Each team had 3 boxes to unlock before making it to the final box.  The final box contained a syringe which I filled with talcum powder...this was supposed to be the antidote.  The team that made it to the syringe first was able to inject it into Suzette's IV tube!

The 3 tasks that each team completed were just review questions for 3 different topics that would appear on the semester exam.  You could use any review questions or worksheets that you would normally use and make them the tasks for each group.  Students were so engaged in this lesson that they were getting angry at each other for not hurrying fast enough and I had to intervene to calm them down.  It was definitely exciting, and not your usual exam review lesson.  I think it was a success!  And now that I've tried it once, I think it will take much less time to create the next one.  Please feel free to leave a comment if you'd like more details or if you have any questions.  Happy teaching! 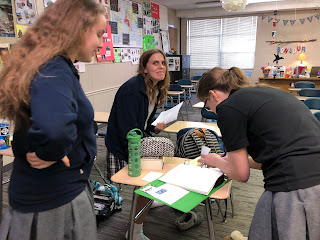 Special thanks to my husband for coming up with the idea of the syringe and the IV tube :).  And a shout-out to the Target Pharmacy for giving me the syringe for free!

Email ThisBlogThis!Share to TwitterShare to FacebookShare to Pinterest
Labels: Activities for French III, how to use a mannequin in your classroom, Motivating your students, Using Props in your classroom