Bonjour tout le monde!  I hope you're all having a great school year!  Today is the first day of my spring break, and I'm really looking forward to some rest and relaxation, and some time to catch up on my blogging :).  And it looks like spring is finally arriving here in Michigan!  I feel invigorated already!

I've been teaching for a number of years, but for some reason I've never included Le Poisson d'avril (the French equivalent of April Fool's) activities in my classes.  I tried it for the first time this week, and was happy with how it went.  I explained the French tradition of taping paper fish on the backs of others without their knowledge and then yelling "Poisson d'avril" when the prank has been discovered.  My classroom mannequin, Jacques, was decked out with fish in order to draw attention to the activity.

I gave students about ten minutes to cut out their own paper fish and to write "Poisson d'avril" on each one.  Then I explained that we'd be having a Poisson d'avril competition on April 1st.  Students were instructed to try and tape their fish on the backs of others before school, during lunch, or after school that day.  I made this rule because I didn't want the activity to be a disruption in other classes. I also sent an email to all of the faculty members to explain this.  Students were told that if I heard from any other teachers that they were being disruptive, they would be disqualified from the competition.  I also came up with a point system: 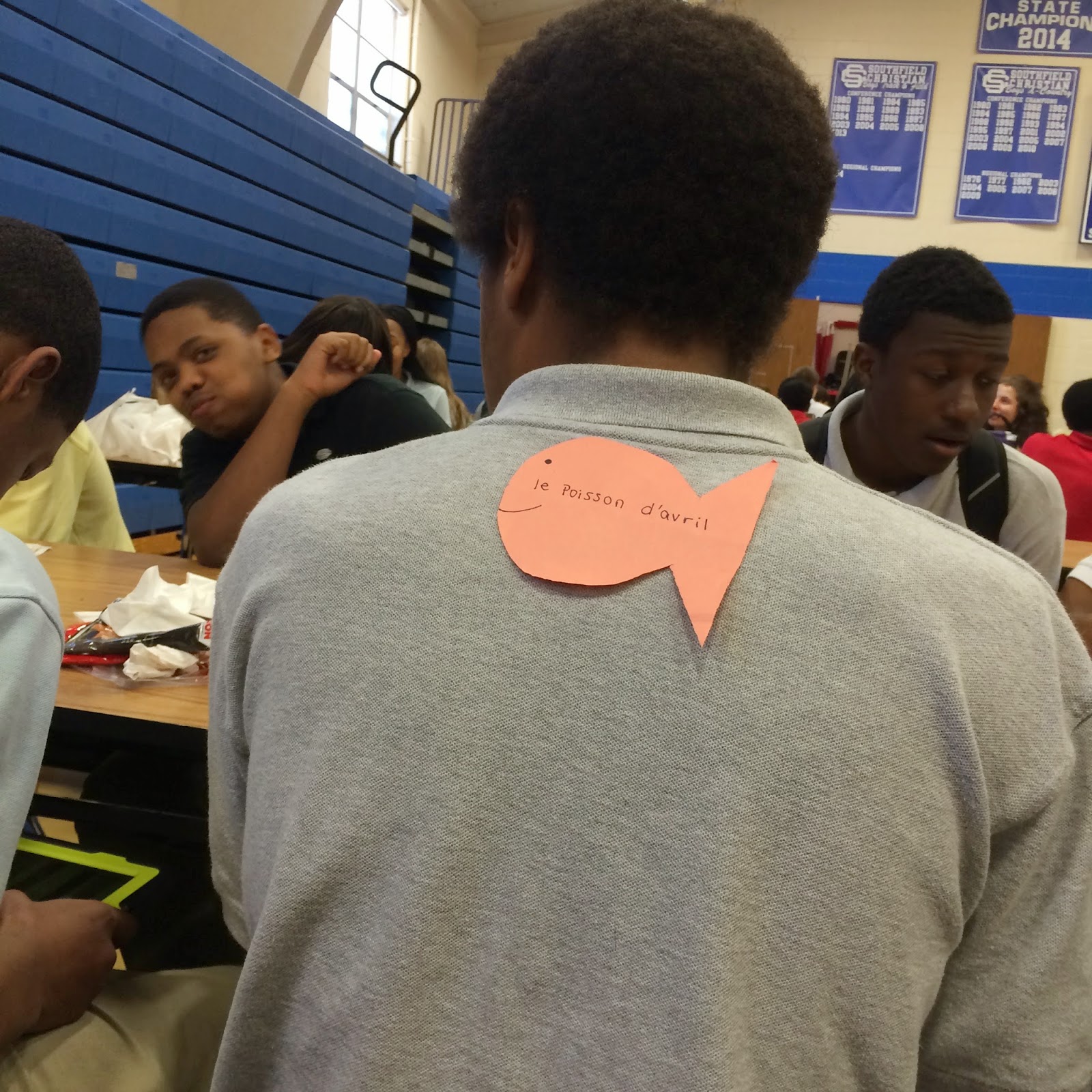 To verify, students were asked to take a photo of the fish on the person's back and then email it to me.  I was really wondering how this would all go, since I can think of a million ways it could have been disastrous.  I'm happy to report that my students really had a ball, and it was just good, clean fun!  Here are some of the photos they sent me.

The next day, the student with the most points in each class was awarded a French prize.  I gave them each a bottle of Orangina and a Toblerone chocolate bar.  Students were required to cut out the paper fish, but they were not required to participate in the competition.  It was successful for many reasons:

It got French outside of the classroom (promoting your program!)
It got students to participate in a cultural activity
Students learned about French products through the prizes that were awarded
It was fun!

Happy Spring.  P.S. No one was able to tag the French teacher!  Huzzah!